The Heart You Need is on sale now!

Posted in General Information | Leave a comment
Posted on November 25, 2018 by Diane Jewkes

Jewkes, Diane R. The Heart You Need. Crimson Romance. Jan. 2017. 95p. ebk. ISBN 9781507203101. $3.99. HISTORICAL ROMANCE
Jewkes sets her new novella (after The Heart You Own) in late 19th-century California. Adeline Ellsworth is a journalist trying to make the move from the society page to the front page in 1896 San Francisco. Her investigation into the death of her cousin Tommy (a police officer) has led her back to society events, where she meets Alec, Lord MacCairn, a Scottish peer who is visiting the city on business. When Alec and Linnie are kidnapped, she has to take him into her confidence and her investigation. Alec, who feels instantly protective of Linnie, insists that he be allowed to help. As the two probe further, their attraction turns into something deeper.
Verdict Jewkes attempts a lot in a short number of pages and succeeds with some of it. Linnie and Alec are appealing, and their quick-fire romance works, but the rest of the story and the other characters are sketched in (necessarily so) and feel thin. Still, fans of Joanna Shupe’s “The Knickerbocker Club” series will find much to like here.—Jane Jorgenson, Madison P.L., WI

The Heart You Need

The Non-Traditional Historical Western Or: How did that Scottish lord get in my Western?

When I started writing the Heart You Own, I knew my heroine, Kara Jonston, would be the daughter of a rancher, but my hero, he was a bit of a mystery. I set out to write a traditional story…you know, … Continue reading →

I created this using a program called wordle.net. Very fun! 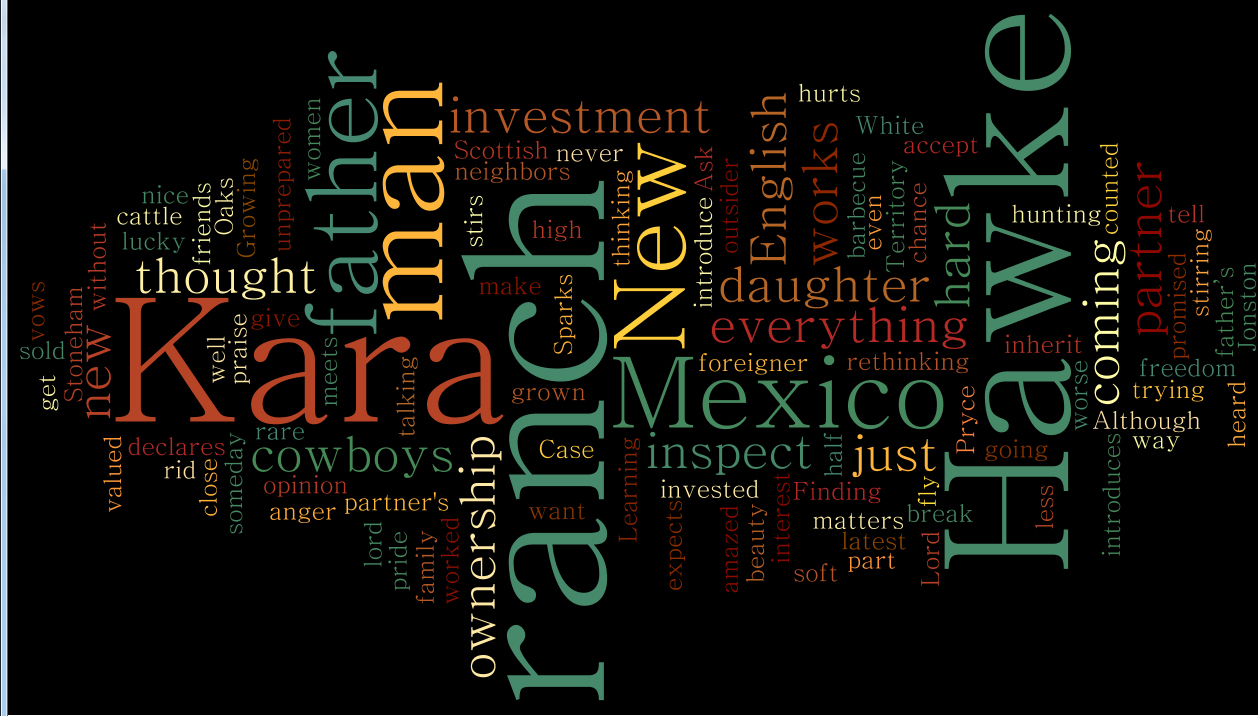 Sometimes the hardest thing to do is introduce yourself.

Hi! My name is Diane and this is where I will let you know about upcoming books I am publishing, hoping to publish and stories I am writing.

I signed a contract in February with Crimson Romance, a division of Adams Media. This is a first for them; venturing into publishing romance, and a first for me – being published.

In June you will be able to purchase my novel, The Heart You Own. As I have more information I will post it. For now:

Why would an English lord want to have part ownership in a New Mexico cattle ranch?  And why did it have to be her father’s ranch?

Kara Jonston has grown up thinking she will someday inherit the family ranch. She worked the ranch as hard as any man. Ask any of the cowboys. They will tell you this is high praise.
Growing up with more freedom than most women, she thought her father valued her opinion and counted on her. Finding out her father sold half ownership in the ranch and to a foreigner no
less without even talking to her hurts her pride and stirs her anger. To make matters worse, this outsider is coming to inspect his investment, and her father expects her to be nice.
Although she promised her father to give his new partner a chance, she vows she will never accept him as her partner on her ranch.

Hawke Pryce, Lord Stoneham, is not English, he is Scottish.  He is not soft, and he is not coming to the New Mexico Territory just to inspect his latest investment.  He’s hunting a man.
Learning the man is in White Oaks, New Mexico, close to the ranch he has
invested in is just a lucky break.

Having heard that his new partner’s daughter works the ranch with the cowboys, Hawke is unprepared for the rare beauty he meets. At a barbecue to introduce Hawke
to neighbors and friends, everything is going well until Case introduces Hawke to his daughter Kara.  Sparks fly!  Kara is amazed at the man before her. He is everything she thought
he would not be. A stirring of interest has her rethinking trying to get rid of him…until he declares there is no way Kara works as hard as any man.